Rock Climbing AT in Bavaria 2013

In January this year (2013), our band went on Adventure Training in Capel Curig, Wales. While the majority of us went hill walking in the nigh frigid weather, me and the other 2 of us went kayaking… in what were frigid Welsh waters.

This September, after coming back from a musical tour in Schalke, Germany, we headed back to Germany and did another adventure training in Bavaria. I initially was going hill walking but when I heard there was an option to rock climb, I asked to be put on it. 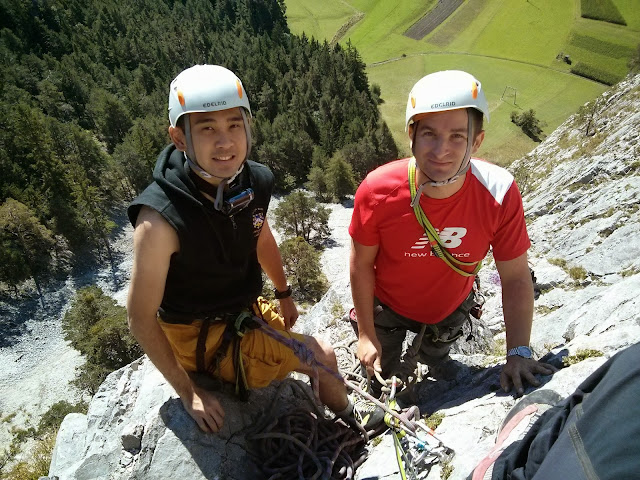 Me and James, half way on top of a cliff in Austria for the Rock Climbing Foundation Adventure Training 2013.

We drove in 3 vans for nearly 15 hours to Wertach, Germany from Windsor and went to stay in an Adventure Training Centre there. Together with James, we were introduced with Viktor was to be our climbing instructor.

He was a bald man in his late 40’s, lean in figure and spoke enough English to deliver his lessons. He first took us to Ottobeuren SportWelt to get us introduced to rock climbing. I had rocked climbed before when Mark used to take me to the Mile End Climbing Wall, across the canal in our university. Although it had been about 2 years since I last climbed, my muscle memory remembered how to grip on the ledges and climb up and down without too much difficulty. 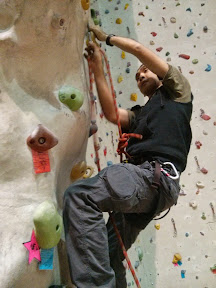 Getting grips with climbing again after about three years of lull.

Viktor’s first lesson was a steady introduction to climbing using a safety harness, ropes and a belay device. I had a brief experience of climbing with ropes back when we went Adv Trg in Phase 1, it was good to have the refresher.

We then started climbing routes fairly quickly but at our own pace, starting at the easy difficulty of about 3+ to 4+ (French grading). James hadn’t climbed much before so it took longer for him to grow in confidence using the equipment and climbing. One step at a time. 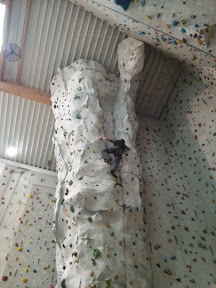 Me climbing a 5+ route at SportWelt

There was a 5+ yellow route on the corner of the wall that I lead climb, which felt good to have done.

On the third day, we moved to another indoor climbing centre in Oberstdorf. James and I still climbed grades of 3+ to 5+. After three days of climbing for 4 hours each day, our upper bodies were naturally aching so we didn’t climb as much as we did in the 2 previous sessions. However, we did more work with ropes for climbing and abseiling single and multi pitches. There was quite a lot to remember and the only way to get better at them was to keep doing them.

When we got back to Wertach, I was told there was a festival in town. The locals brought their cows down from the mountain and they paraded the cows through town. Men in white shirts, and their short shorts (called lederhosen), topped off with feathered hats accompanied by women in dirndl herded their cows through the streets lined with tourists and locals. Unfortunately, James and I were on the rocks during this event so we missed this. However, the festivities continued on through the night. We regrouped with the rest of us at the AT centre and altogether went to a beer tent, where the men in said clothings gathered and steins of beers were served by brawny and braided women, backdropped by jolly schlager music. PROUST! 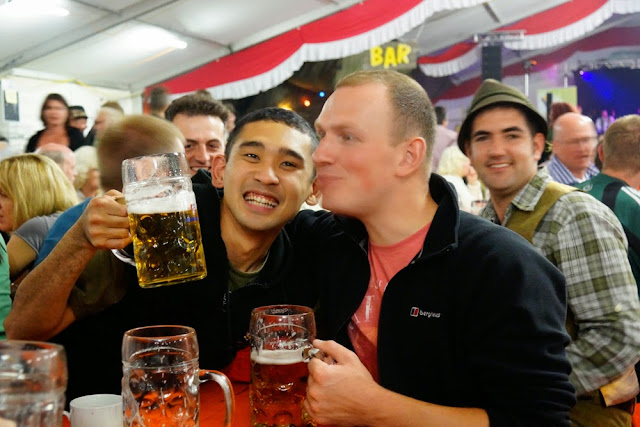 Having steins all night with Wanger, Kenny, Robbo and the rest of us! PROUST!

Kenny, our trombonist, knew Christiana from the AT centre, who’s a local and she requested for our band members to play a stint with the house band, and it was a success! Joined by Powell and Rach on stage, everybody danced and singed to “Take Me Home (Country Road)”. Lots of steins were consumed and everyone was happy!

The rain stopped and the skies cleared. Viktor took us outdoor climbing in Nassereith, Austria.

We drove for about an hour and a half to a little town of Nassereith on the Austrian side of the border. It was interesting to see a statue of St Sebastian (patron saints of soldiers) in the town square. When we reached the back of the town, we parked the car and walked passed the cliffs and up a hill, about 300m away. The exposed crags were enormous and with the sun shining brightly, it was a glorious day for climbing. Over in the distance, there’s a white castle sticking out over the canopy and I was told it was the Neuschwanstein Castle, the inspiration for the Sleeping Beauty Disney Castle and Chitty Bang Bang…apparently! 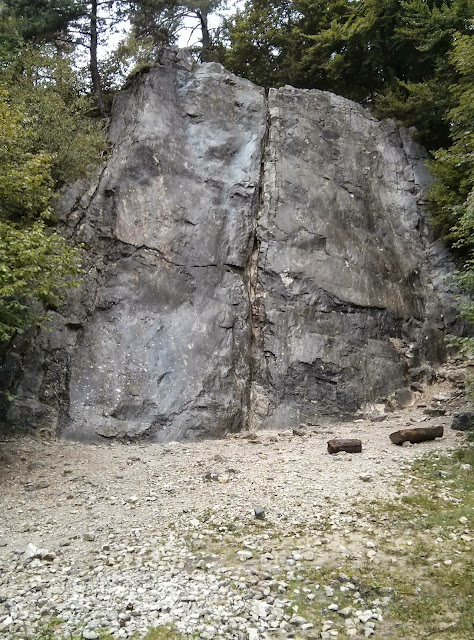 Viktor taught us how to use outdoor guidebooks, crampons and hexes as well setting up belaying from the top, which involved putting into practice the different knots we learnt: clove hitch, Italian hitch and making double figure of 8s. 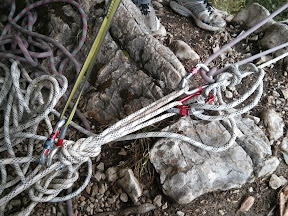 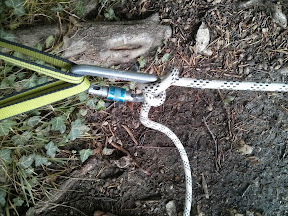 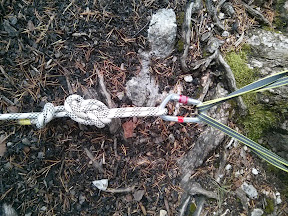 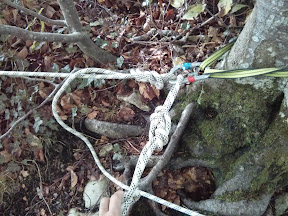 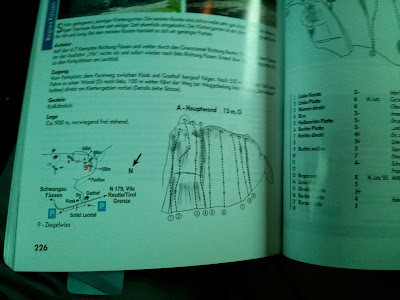 An excerpt from the the guidebook we used showing the routes and their difficulty.

After the brief lessons in the morning, we had three hours to put these into practice and tried out several routes, starting from 3+ to 5-. To start us off, James and I did the Linke Platte (1) with a difficulty of 3- to familiarise ourselves with climbing outdoors. To finish off the day, I did the 5- route Halbrechte Platte (5).

After scoff, back at the AT centre, Lou brought some flute duets and we jammed for a bit before joining the rest at the bar for a couple of drinks! As we do…

We went back to Nassereith to climb. James and I were assessed that day to see if we can do the next level, which is the Rock Leader Training. We went on a more exposed cliff face with steeper and higher climbs called Tieftal. Our rope was only 60m long so we had to do multi-pitch climbs to reach the top of the route, which was not the top of the cliff. We did a route called Samersteig and it was broken down into 3 pitches. 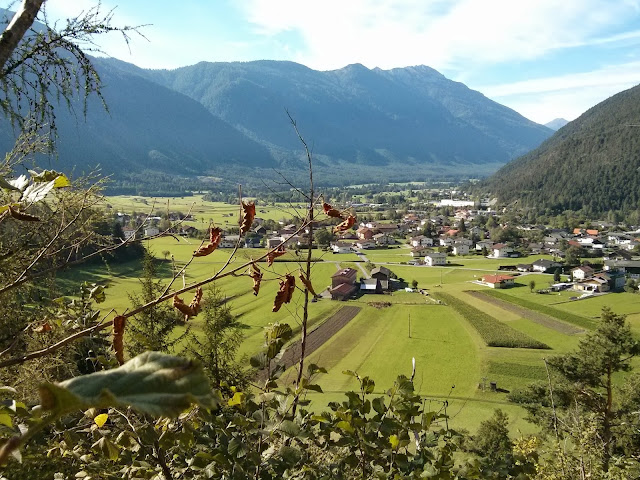 Not quite at the top, still the view of the valley with the small and quiet town in the distance was very picturesque.

In the past few days, Viktor lead all the way to make sure that the climb was safe but on our last climb, I took the turn to lead to put the skills I’ve learnt to test, and suffice to say we made it up and down without scrapes or breaking any bones! 🙂

After about 5 hours on the rock, we then packed our stuff and headed off to the cafe in town to do the written test element of the Rock Climbing Foundation qualification and passed  them!

We had Viktor for a couple more days after because we were in Wertach for 10 days. James decided to go with him on the Saturday but I heard the guys are going klettersteiging. Our team comprised of me, Rachel, Matt, Evatt and Tomasz (our Slovenian guide). It sounded nice, it being foreign and novel sounding so I opted to join them on that. In essence, there is a wire cable attached to the  rock face, laying out the route and you clip on the carabiners attached to your harness on to the wire cable to limit any falls – that’s klettersteiging or via-ferrata as it is otherwise known. 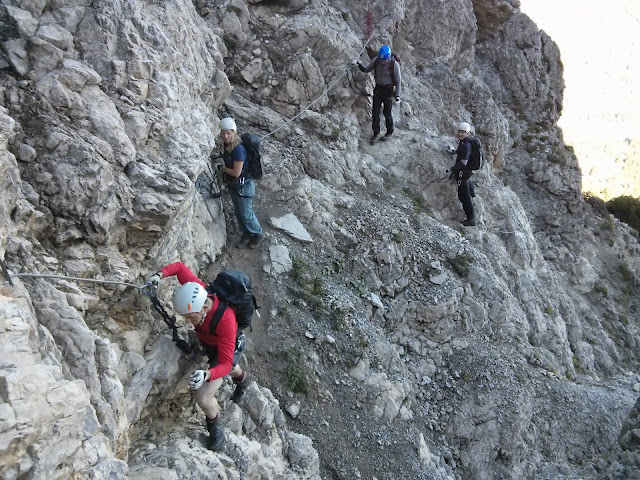 The climb wasn’t particularly difficult for me because there were plenty of paths that had very flat ground, but there were steep climbs that were quite slippery because the rock face was very smooth. The loose grit also made it less stable so there were some challenging routes along the one we took. Rachel hadn’t climbed much before as she was part of the hill walkers so she found some parts of the klettersteig a bit beyond her comfort zone but Tomasz, who was closest to her along the route helped her find footrests and hand holds to continue on, while we gave her plenty of encouragement and assured her that it was safe to go on to stop her from panicking.

The route took us about 3 hours and the top of the klettersteig route was some metres from the the peak of Iseler at 1876m! We ate our lunch at the ridge on top while we absorb the grandeur of the German Alps. The sun was still high in the clear sky and there was a gentle breeze rustling the mountain bushes. It was all very idyllic!

Day 7 was rest day! Some of the guys went to a lake to swim, only to come back at the end of the day with rather amusingly sun burnt skin.

I rejoined Viktor and James for another day on the rock in back in Nasserieth. We did another multi-pitched route of the same difficulty – called the Rolling Stone on the same rock (Tieftal). 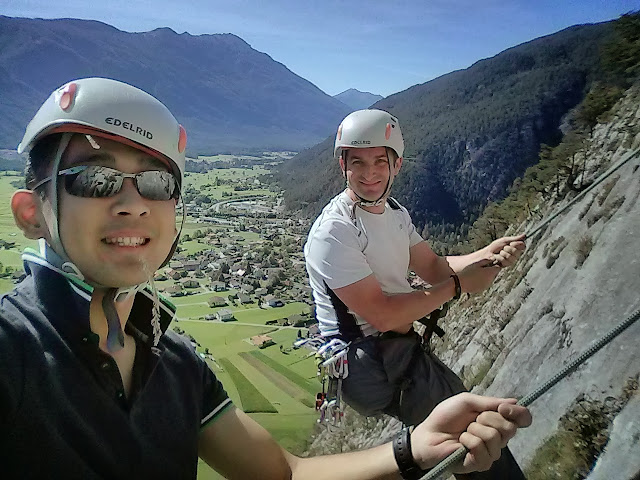 Our last day on the rock. happy and unphased by the heights and the elements!

One thing I started to notice was because we were using Pruskic knot as an extra safety device when we rappel, it took a long time for us to descend! Viktor got us rappelling down the rock in two’s and James and I slammed to each other as we went down! Awkward but funny.

We concluded the day by going down this slope full of loose rocks. Viktor run down it, not even once stopping and he reached the bottom as soon as he had stepped off! Meanwhile, I nearly snapped my ankle trying to do the same and James took his own steady and surely pace behind me. I wish I had taken a video of it!

When we reached the car park, we joined the rest of the Adv Trg climbers from an RLC regiment who have been climbing with us for a group photo to top the whole week off. 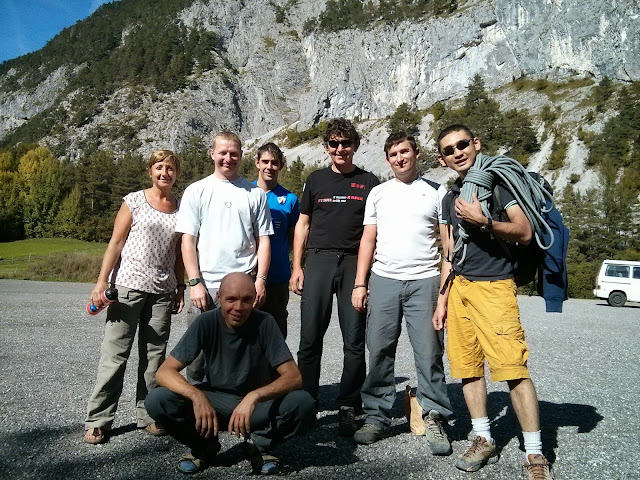 Our Adv Trg climbing team complete with Viktor (sat down) our instructor, the RLC lot (on the left), Danilo (another instructor), James and me.

Without any reservations, this had been a successful, fun and productive time away from England. James and I passed our assessments and Viktor duly wrote us a recommendation to go on the next level of the qualification to round off the week’s worth of effort! YUSH!

Never minding the 15h trip back home on a rather dog smelling van, we had a very refreshing time away from music and Guards. I look forward to when we do skiing in January 2014, for yet again another Adventure Training. 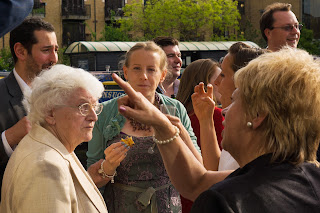 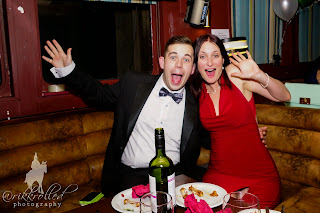 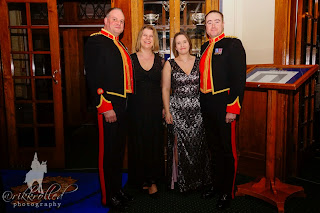 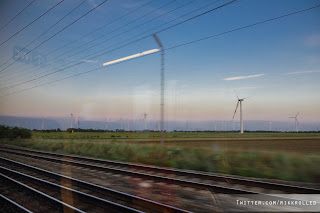 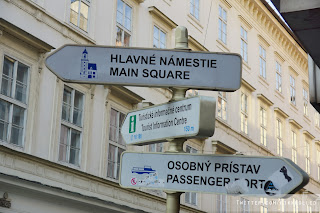