After what seems to have been the longest 14 weeks of my life, the time came to finally pass off as a British Army soldier.

First off, the long days were filled with drill rehearsals on and off the square. Much to our relief, PT became less arduous. Can’t quite tell whether they did it to avoid injuring us or we really felt that our body had grown accustomed to some extra phys over the weeks. We did a few less intense circuits and battle PT. Cpl and I teamed up on one of Battle PT sessions. Hilarity ensued as we competitively sprinted, dove in, went over and leopard-crawled across stations, all the while chucking chubby banter at him and me receiving gay trash talk left, right and centre in between trying to catch our breathes.

On another occasion, we played volleyball and a series of mini games. Our Tp Commander (who was in our team) did an impressive 120 football ups. I think he only stopped as he got bored not because he couldn’t continue to do more. Rather amusingly, our section came second in this game even as we weren’t really trying hard. On another afternoon, we were pitted against the other sections on camp orienteering, a bit like the same map nav we did back in Ex Half Way. Getting let loose in camp without marching and being in squads was definitely a strange but very liberating feeling. It was still exhausting in the summer heat but very good fun.

At some point this week, it was announced that I was to receive the ‘Best Shot’ award. DJ  on the other hand, got the majority of the troop’s vote to become the ‘Soldier’s Soldier’ award. Makena got ‘Best in PT’ while Klass got ‘Best in Drill’. Lastly, to the upset of 1 Section and their Bombardier, 4 Section got the ‘Best Troop Award’.  The award winners had to do separate drills to receive our awards so we had a few extra specific sessions on the square. It was amusing to see Cpl Howe to do drill to get his Section prize… a man epitomises, in all sense of the word, the smartly rigid panache of a British Soldier but it was evident he really disliked ceremonials!

On the Thursday, I played the first game of football of my life. I couldn’t tell if it was fixed but I scored there too. Despite our winning score, I was incredibly shit at it and had never really been into it.

For our last drill rehearsal, we were introduced to our new Squadron Sergeant Major, who was to take our Pass Off parade as his first on his new post. He also instructed us along with the Squadron QuarterMaster to do all the block cleaning on that last night, ready to just leave the block straight after the parade.

8hrs on the Parade square yesterday…so today's Pass Out had better be good! HURRAAY I'm passing out today!

The long-awaited day of Pass Off arrived. Without a doubt the best Friday of my life. Our training staff took us to scoff, and sat with us for breakfast at a special little corner of the scoff house. I had my last weird breakfast of: porridge with  raspberry jam with a side of bacon, egg, grape jam and sausage sandwich.

After block jobs, we had a march rehearsal with the duty band – Band of the Royal Electrical and Mechanical Engineers – around the camp to get us all used to the bass drum beats. Every Friday, we heard the band and wished that it were us Passing Off. It was such a great satisfying feeling to be the ones actually marching with music this time around.

Back at the block, for some dumb reason, my DSLR slipped off my hand as I took it in a rush from my top civvie locker. It dropped on to the hard cold floor. DISASTER! The screen was smashed. I couldn’t review the photos I took but it seemed to continue work so I took a few snaps.

There was one last thing that our training staff taught before we headed out to the parade square – the tradition of drinking port. We cheered for toasts several times and bomb-bursted back to our rooms to sort out the rest of our ceremonial kit.

I went back out to put stuff in my luggage in the baggage store, and on my way back, past the Troop Office, Cpl had unforunately gripped the nearest person i.e me and told me clean up the remaining port on the table. We poured the left overs into a cup. It was travesty that the recruits didn’t finish their ports! Agreeing that it would have been a shame to throw such fine quality port, I just drank two cups full…

I somehow managed to get dressed at the state I ended up in (2 weeks of no alcohol does shit for my alcohol tolerance… ahem lightweight!) but I remember everything becoming very amusing. I was in fits of giggles at the stupidest of things. Outside the block, preparing to get into formation, Cpl Howe took to me the side and asked me if I was fit to do the parade and I may have embellished a bit because there was no way I was gonna miss my own Pass Off parade!

Thankfully, there was a tad more waiting before the actual parade started. By the time I was ready to collect my prize, I had already sobered up and the parade went without a hitch.

FInally got to wear my forage cap with my capbadge!

I joined my mum and her four friends after the parade for a spot of lunch at the scoff house, where they met my Cpl. Mum and her friends had no idea where I was in the parade until I was called out to receive my award! 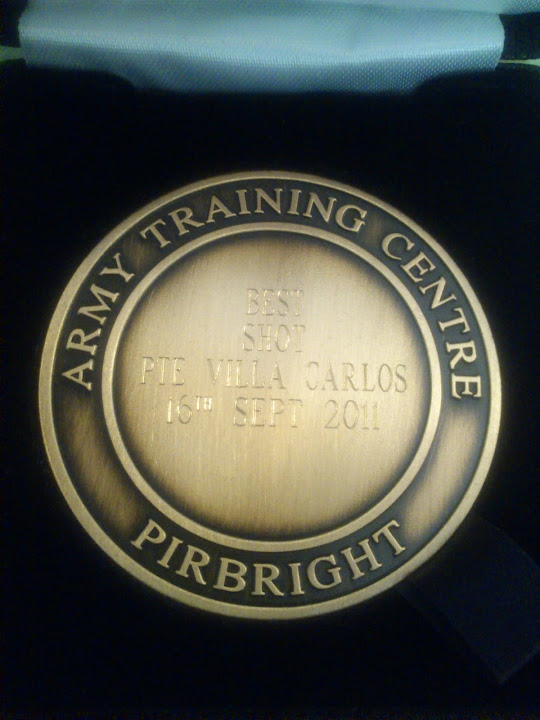 Scoff, was after all is just a quick meal. I’ve stayed long enough at Pirbright and finally, on the 16th of September 2011, I left Pirbright without further delay.

This 14 weeks had definitely been the best and worst 14 weeks of my life. My time at Army Training Pirbright gave me a solid foundation to becoming a British Soldier. Throughout the process, I learnt so much about my job, other people and more importantly about myself. I’ve done something I thought I’d never be able to do. And on top of it all, I’ve made friends with the unlikeliest of characters from many parts of the UK. I look back at this time of my life, 3 years later as I re-type this blog and I can honestly say that I have no regrets in joining the British Army. Some of my Army mates have called me odd for having such a positive experience of Pirbright, when pretty much everyone I met detested it. It certainly hadn’t easy but I proved to myself that with grit, determination and intelligent application of will, many things are possible.

So onwards to my next adventure. I get 9 days off before starting my Phase 2 Training to learn the oboe at the Royal Military School of Music, Kneller Hall in Twickenham, London. Woooooooooo! 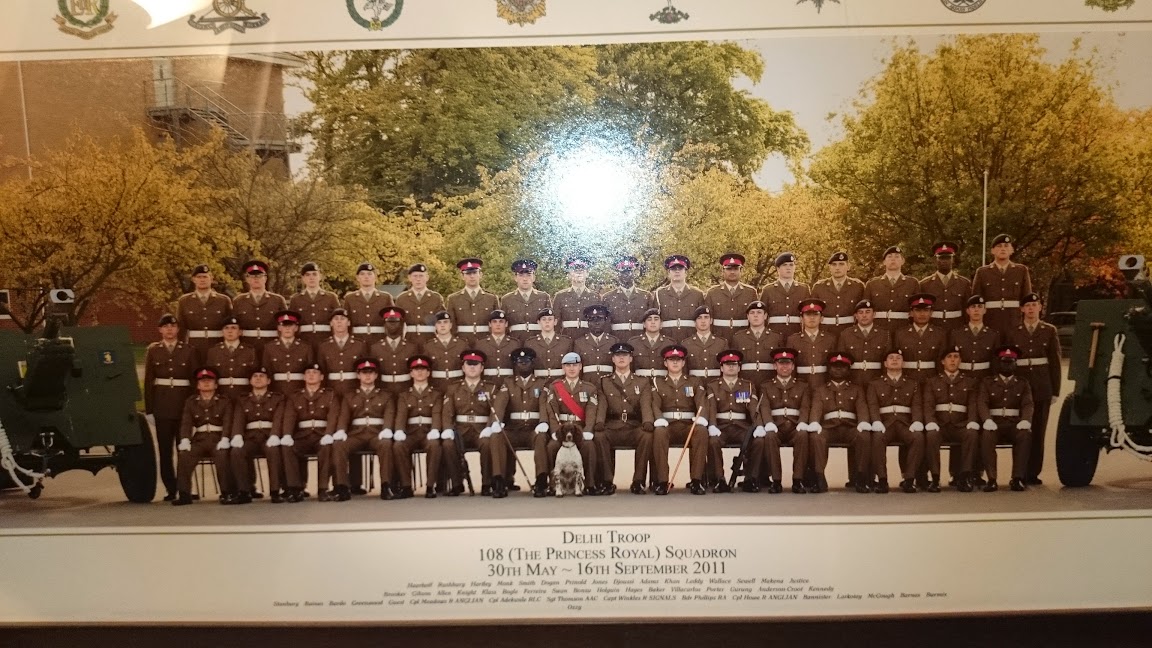 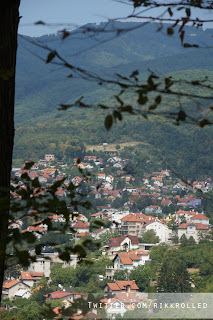 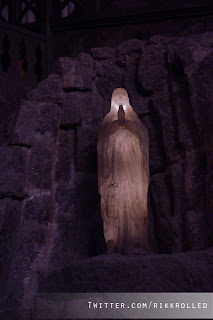 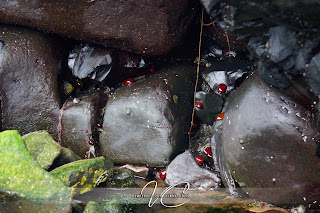 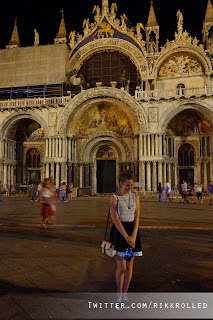 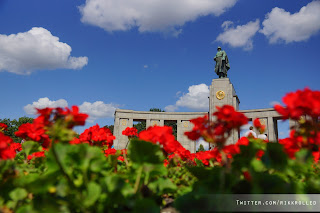